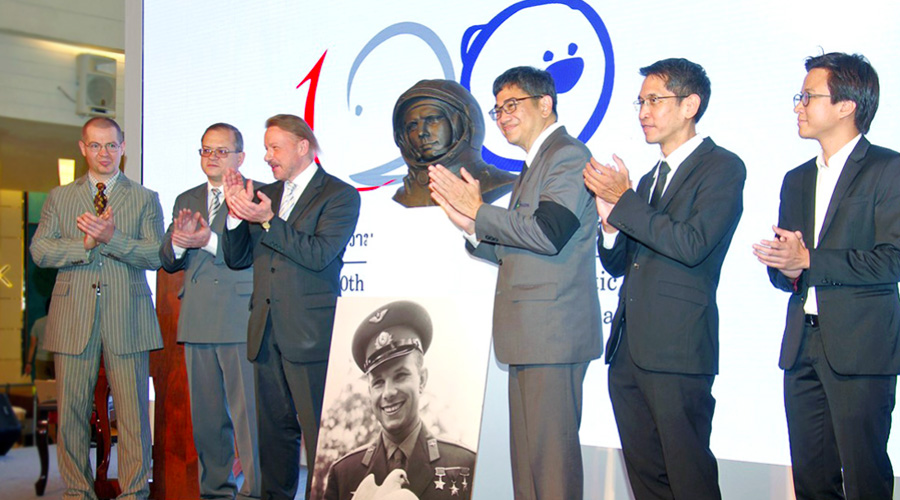 18 July 2017
On July 15, within the framework of the Russian-Thai Festival, the exhibition devoted to the life and heritage of Yuri Gagarin was opened in Thailand. The Fund “Dialogue of Cultures – United World” initiated the donation of the cosmonaut’s bust to the Museum of the Geo-Informatics and Space Technology Development Agency.

On 14-16 July 2017, all events of the festival program were timed to 120th anniversary of the establishment of diplomatic relations between Russia and Thailand. The bronze bust of the first cosmonaut of the Earth was presented to the public at the space exhibition’s opening ceremony. During these days the exposition “Yuri Gagarin: Life and Heritage” was attended by a great amount of people. At the end of the Festival, the monument, solemnly donated to Thailand by the Ambassador Extraordinary and Plenipotentiary of the Russian Federation Kirill Barskiy will be transported to the city of Si Racha (Chonburi province) - the location of the Museum of the Geo-Informatics and Space Technology Development Agency "Inspirium".

In an interview to the news agency, the Ambassador said: "The project to install bronze statues of Yuri Gagarin in different countries of the world started in 2011 upon the initiative of the Dialogue of Cultures - United World Fund. During these years, more than 30 busts of the first cosmonaut appeared in 23 different countries."