«Dialogue of Cultures - United World» International Public Charity Fund took part in the organization of the national «Sabantuy» holiday. On July 1, 2006 residents and guests of Moscow were shown national yurts of nomadic peoples in various parts of the capital. 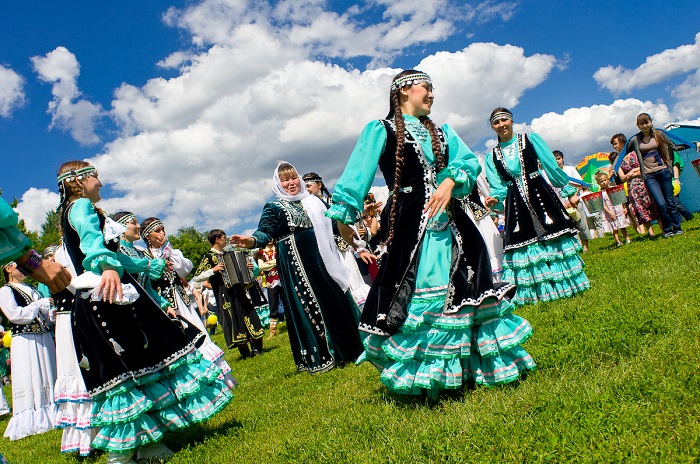 «Sabantuy» was first organized in the capital in 1996, and since then this wonderful holiday is annually celebrated in the city. In 2006, «Dialogue of Cultures - United World» Fund took an active part in organizing the event.

«Sabantuy» holiday program included three parts: cultural, sports and trading. The cultural program was realized with the participation of well-known folk art masters of the national republics. As a part of this program, the Fund established national yurts in different parts of the city to demonstrate achievements of national cultures of nomadic peoples inside.

The sports part of «Sabantuy» included horse show, weight-lifting competitions and national kuresh wrestling. Festive trade presented visitors with dishes of the national cuisine and lots of souvenirs, books, magazines, newspapers and manufactured goods. Sports competitions were followed by folk games, contests and competitions, in which everyone could take part. Fun contests such as «pots crashing» and «cock fighting» were of particular interest. For the youngest visitors, there was a children’s playground with spirited competitions and national games. The guests could also visit a fair and an Oriental bazaar, ride horses and ponies. The festive program of «Sabantuy» ended with an open-air disco for youth.

One of the activities of «Dialogue of Cultures - United World» Fund is revival, preservation and popularization of multinational culture of nomadic peoples. During the celebration of «Sabantuy», the Fund installed three yurts in Bitsa Equestrian Complex. National melodies of nomadic peoples were played under the arches of the yurts. During the festive tea drinking, the Fund’s team told the guests of «Sabantuy» about the cultural projects of «Dialogue of Cultures - United World».

Two yurts were installed in Hermitage Garden. One of them had an ethnic shop «A step away from heaven» offering traditional clothes and decorative souvenirs, handicrafts, theme books, video and audio products from different parts of the world. The second yurt had cozy tea and shisha rooms. The Cosmoyurt yurt camp comprised 22 national yurts, including the main Khan-yurt, two yurts-canteens, yurts for accommodation, yurt for readers, office yurt, yurt & ethnic shop, holistic yurt of the Universe, and a Star planetarium in the form of a yurt.