On April 27, 2007 the Fund installed a monument to Sherlock Holmes and Dr. Watson in Moscow, in the territory of the Embassy of Great Britain. 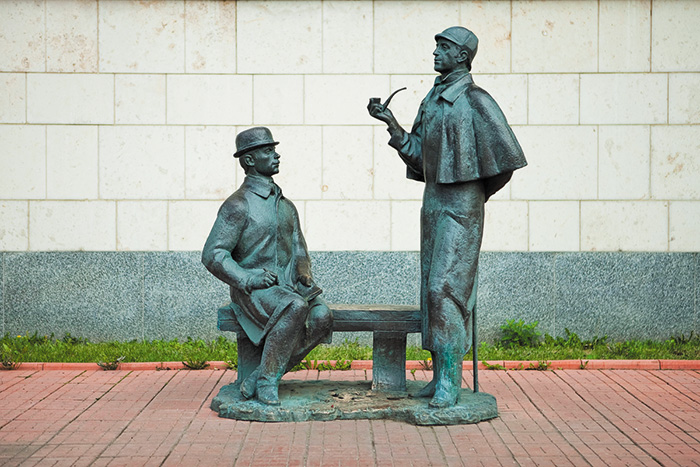 The initiative to install the sculptural composition dedicated to the popularly beloved heroes of English detective stories was supported by the Embassy of Great Britain in Moscow. Opening of the monument was timed to the 120th anniversary since the publication of the story about the adventures of the great detective «A Study in Scarlet» by Conan Doyle. It took the author of the monument Andrei Orlov 4 months and 800 kilograms of bronze to make the sculpture. Andrei created images of the literary heroes based on the works by Sidney Paget - the first illustrator of stories about the adventures of Sherlock Holmes. But it is easy to discern the features of Vasiliy Livanov and Vitaliy Solomin, who played these characters in the Soviet TV series. By the way, Vasiliy Livanov was one of the honorary guests at the opening ceremony.


«These heroes have long become the personification of Great Britain in the eyes of Russians and a recognized symbol of Russian-British friendship» - British Ambassador to Russia Anthony Brenton said in his letter in support for the Fund’s initiative. «Installation of the sculptural group on the Smolenskaya embankment will be another bridge between the cultures of Great Britain and Russia».

Vasiliy Livanov, People’s Artist of Russia, said:
«As reported in the British press, Vitaliy Mefodyevich Solomin and I returned English literary heroes to England. Our tandem in the TV series is remembered by gentle irony, good attitude to the world, people and each other, and not by the analytical thinking, or even the amazing similarity with the literary heroes. I very much hope that the sculptural composition «Sherlock Holmes and Dr. Watson» will forever maintain this idea and will awaken the best feelings in representatives of different generations».

Ruslan Bayramov, President of «Dialogue of Cultures - United World» Fund:
«The author of the book about Sherlock Holmes was an Englishman, and this absolutely British story was brilliantly conceived and played by Russian actor V. Livanov, who, without being a native Englishman, was able to deeply feel and convey its essence. For me, it is the best example of cultural integration. The peoples of England and Russia equally love and value Sherlock Holmes invented in one country and taken with all the heart in the other one. This confirms the deep inner unity of our peoples who may be superficially different, but who are so spiritually close and capable of mutual understanding and integration. Projects of «Dialogue of Cultures - United World» Fund are precisely aimed at the popularization of these ideas. I think that the sculptural composition «Sherlock Holmes and Dr. Watson» will be another step on the path to intercultural dialogue».

Andrei Orlov, author of the sculpture:
«The legendary phrase of Sherlock Holmes «Elementary, my dear Watson!» became a popular saying in Russia. The images of these two detectives are inseparable for me as an artist. And I would like anyone feel a complicit in the adventures of these characters. That is why I thought of the following sculptural composition: you can sit on a bench next to Watson dreaming or participating in his conversation with Holmes. This is my third project with «Dialogue of Cultures - United World» Fund, and I am pleased to participate in such projects because I think that unification of cultures is an important and noble task. I would like our city to have more urban sculptures in the parks and alleys».