«Russia - Dialogue without borders» project was implemented in 2012/13 with the support of Civil Society Institute Regional Public Organization, in the framework of the Presidential Grant. 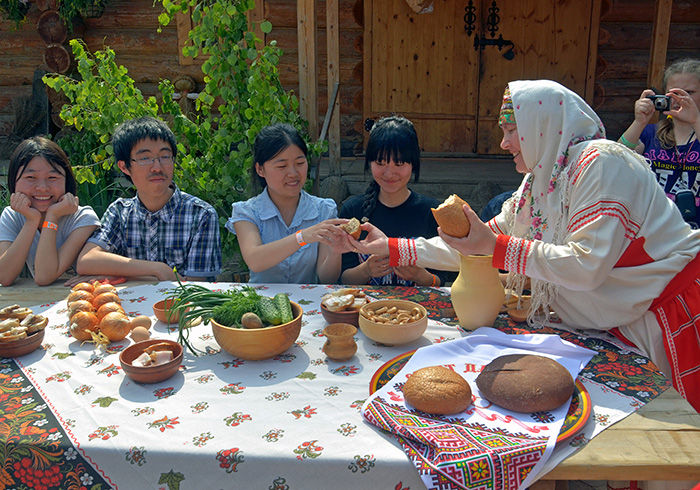 «Russia - Dialogue without borders» project is aimed at implementing the program developed for the international youth team contributing to the creation of a favorable climate in the interethnic student environment, adaptation of foreign students and development of public diplomacy, as well as forming a non-biased perception of Russia in the world.

The first two-day trip of 96 project participants to «ETNOMIR» Cultural and Educational Centre took place on February 23-24. Experts of the Cultural and Educational Center held interactive sessions for the students introducing the culture and traditions of the peoples of Russia to give unique knowledge about their life and customs. Also, the project participants took part in the celebrations of Nowruz and Maslenitsa. Workshops in bakery, traditional toys and handicrafts were held for the students in the Khan-yurt in the territory of the North, Siberia and Far East ethnic yard and in the houses of the Museum of the Russian oven and bread house of the Belarusian khutor. On March 23, M.Yu. Martynova, project expert and Professor of the Russian Academy of Sciences, Deputy Director of the Institute of Ethnology and Anthropology, gave a lecture on the aspects of intercultural communications and importance of public diplomacy, as well as «Many peoples - single country» seminar with presentation of the book of the same name. On February 23, the students had a festive evening dedicated to the Day of Defender of the Fatherland, which ended with an ethnic disco. 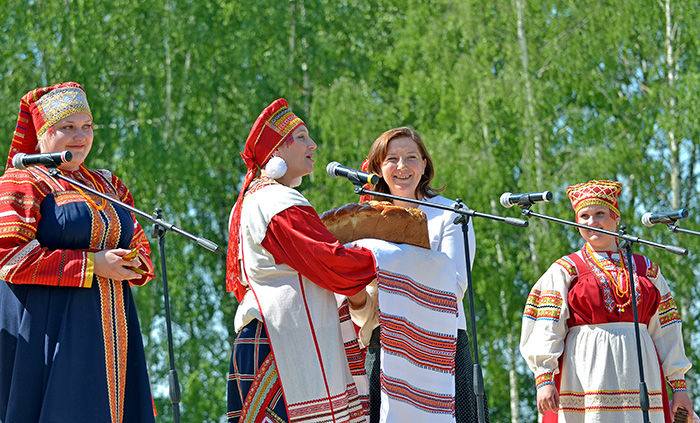 On March 23, the students of Kaluga State University came to Moscow. Students of the People’s Friendship University of Russia welcomed them, acquainted with their student life and organized a tour on the campus and the University. Director of the University Museum guided a tour on the history of the University, introduced the project participants to outstanding alumni. Project curator in the University I.I. Rubakova held a seminar introducing the history of Russian education and its close historical ties overseas. Project expert, Prof. M.Yu. Martynova held a presentation of her book “Aspects of the Russian everyday lifestyle” and gave a lecture on the aspects of intercultural communications and the importance of public diplomacy. Then, the project participants - students of the philological faculty - had thematic excursions at the museum of Mikhail Bulgakov. On March 27, 25 foreign students of the People’s Friendship University of Russia visited Skolkovo, the most innovative and young Russian project. The students took sightseeing tours in the Technopark and Hypercube, heard a lecture-presentation of the innovative projects of the Technopark and met with the residents.

On March 31, according to the project schedule, foreign students of the People’s Friendship University of Russia went to Kaluga to meet foreign students and get acquainted with the student life of their Russian counterparts in the Central region of Russia. Kaluga State University students organized a tour for their new friends around the historic part of Kaluga, during which the guests got acquainted with the historical and cultural heritage of the ancient Russian city. The students also visited Kaluga State University, where University Pro-Rector Ye.I. Khachikyan held a role play with the project participants on the design of communication patterns in a foreign language environment. Then, all the participants of the project visited Kaluga Regional Drama Theater, where they took a tour behind the scenes around the theater building. K. Soldatov, Director of the theater and of the future «Russian language - Russian soul» festival, and N. Yefremenko, leading actress of the theater, conducted a session with the students on the preparation of the overall project, where they discussed the program of the festival and the distribution of roles. Then, the project participants had a tour of the State Russian Museum of Cosmonautics with a visit to the planetarium. The students, in particular, foreign participants of the project, got acquainted with the achievements and history of Russian cosmonautics with great interest. Then the students of KSU accompanied their guests to Moscow.

The next meeting of the participants in the «Russia - Dialogue Without Borders» project was held on April 20-21 at «ETNOMIR» Cultural and Educational Center. They got acquainted with the innovative projects of modern Russia through the example of Borovskiy Technopark, the economic potential of Kaluga region.

The main results of the «Russia - Dialogue Without Borders» project are as follows:

The significance of these results has already been appreciated by the project participants themselves, project curators and Rectors of these two universities. Positive perception of the «Russia - Dialogue Without Borders» project by Rectors allowed us to see the potential to continue the project program as an effective tool for the development of public diplomacy. Testing of the «Discover Russia» program on the adaptation of foreign students will allow its implementation on a permanent basis in universities and organizations receiving foreign students and staff. The review of the events held during the reporting period allows to say that they all contributed to developing an objective perception of Russia in students. During this stage, the students saw the historical and cultural side of life in Russia, its potential for innovation and the future. For us, it is important that the students are happy to participate in the «Russia - Dialogue Without Borders» project, which expands the boundaries of consciousness and blurs the boundaries of countries and states, and that they are looking forward to new meetings.

Culture,  Education and Science
All projects of the Fund