German baron, descendant of the ancient lineage of Münchhausen in Lower Saxony, cavalry captain of the Russian service, historic and literary character.

In May 2008, «Dialogue of Cultures - United World» Fund in cooperation with the Administration of Bodenwerder presented Baron Münchhausen monument to the great inventor's homeland. 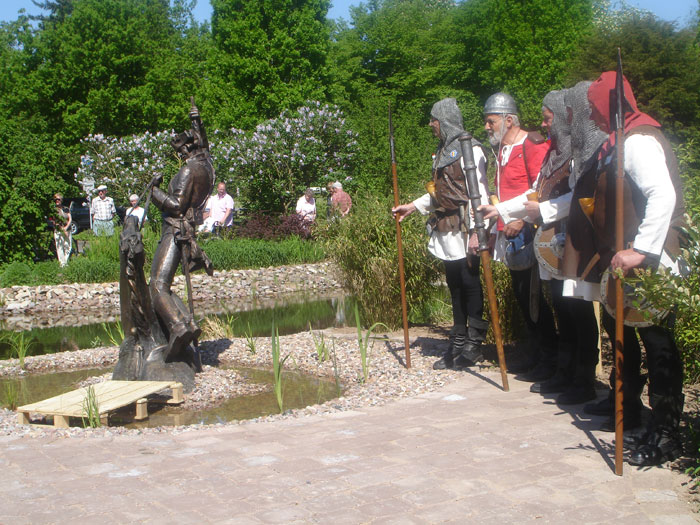 Karl Friedrich Hieronymus Münchhausen was born on May 11, 1720 in the German city of Bodenwerder. German baron, descendant of the ancient lineage of Münchhausen in Lower Saxony, cavalry captain of the Russian service, historic and literary character, Münchhausen became a common name referring to a person telling incredible stories.

The monument was installed near the preserved house of Münchhausen, not far from the museum of Münchhausen. Anyone who read the works by E. Raspe translated into Russian by Korney Chukovskiy remember one of the stories told by the Baron about how he got stuck in the marsh and escaped by pulling himself and his horse out by the wig tie. It is this piece that was captured by the creator of the monument, artist Andrei Orlov.

The second monument is installed in Moscow, near the TRAMPLIN shopping center. Installation of the sculpture was performed on August 28, 2005. Next to the sculpture there is a board with brass plates engraved with the Baron’s famous dictum.