The purpose of the Intercultural Dialogue in the Youth Environment conference was to create a space for dialogue between the Russian and Azerbaijani youth. 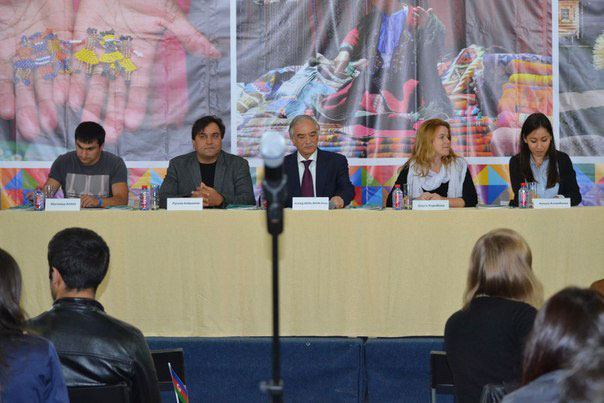 As part of its activity on creating platforms for dialogue between cultures, the Fund provided support for the «Intercultural Dialogue in the Youth Environment» conference aimed at creating space for dialogue between the Russian and Azerbaijani youth. The project was initiated by the Azerbaijani Youth Organization of Russia (AYOR) that invited heads of Russian youth organizations, public figures, diplomats and activists of AYOR from Obninsk, Tula, Kaluga and Moscow. The event took place on September 7, 2013 in «ETNOMIR» Cultural and Educational Center.

The audience saw a video on the AYOR activities. The conference participants talked about the importance and need for such conferences aimed at the development and strengthening of intercultural dialogue among young people and expressed gratitude to the AYOR for the initiative to hold a meeting.

Ambassador Extraordinary and Plenipotentiary of the Republic of Azerbaijan to the Russian Federation Polad Byulbyul-oglu spoke in detail about bilateral relations between the states, praised the role of AYOR in building cultural bridges between the youth of Azerbaijan and Russia, stressed the importance and relevance of humanitarian events aimed at rapprochement of our countries and peoples. According to him, it is very symbolic to hold such a conference in «ETNOMIR» uniting cultures of the world in a single ethnographic park on the initiative of AYOR (the Russian acronym «AMOR» meaning «love» in many languages). UNESCO Coordinator of cultural projects Fatima Alchinbayeva read out a congratulatory message of the Director of UNESCO Moscow Office, UNESCO Representative in Azerbaijan, Armenia, Belarus, Republic of Moldova and Russian Federation Mr. Dendev Badarch, which says:

«Let me draw your attention to the huge cultural potential of Russia and Azerbaijan. It includes a rich historical and cultural heritage, tangible and intangible, and significant potential of the expert community in the field of culture. In the light of numerous challenges in the era of globalization, the implementation of this potential and its transfer to the youth - the bearer of our future - is a key element of sustainable development, a path to the renewal and modernization of the entire society. That's why I can say with confidence that the Intercultural Dialogue in the Youth Environment conference should make an important contribution to the development of intercultural dialogue among young people».

Head of the Administration of Youth Policy of the Ministry of Sport, Tourism and Youth Policy of Kaluga region Olga Korobova told about the cooperation of the authorities of Kaluga region with the «ETNOMIR» project in the field of youth interstate cultural cooperation, noting the important role of the complex as a stable platform for intercultural dialogue. Then Magomed Aliyev, Executive Director of the Sodruzhestvo International Youth Public Organization, took the floor and informed the participants about the work of his international organization, spoke about the fruitful cooperation of the organization with AYOR, referring to the recent visit to Baku in the delegation of the Russian public and youth organizations.

President of «Dialogue of Cultures - United World» Fund, Head of «ETNOMIR» complex Ruslan Bayramov carried out a detailed presentation of the park, emphasizing that the doors of «ETNOMIR» are always open for the youth. He spoke about the charity work of his Fund and expressed his willingness to support initiatives aimed at interethnic and interstate cooperation.

Ibrahim Ibrahimov, moderator of the conference and representative of AYOR, said that since its establishment AYOR implemented hundreds of projects aimed at strengthening friendship and mutual understanding between the Russian and Azerbaijani youth. In this regard, in his opinion, the organization continues good traditions of relations between the two countries aimed at the preservation and development of cultural and humanitarian cooperation, the basis of which was laid by Heydar Aliyev. He also noted that when speaking about the cultural ties between the two countries, one cannot forget the words of the Chairman of AYOR Leyla Aliyeva:

«In my opinion, these warm and sincere relations between people are the most important thing. Azerbaijan has always been a country where representatives of different religions, nationalities and cultures live in peace and harmony».

AYOR presented gifts and souvenirs (Baku and AMOR magazines, books about Azerbaijan and Azerbaijani map) to the leaders of «ETNOMIR» to be placed in the pavilion of Azerbaijan. The conference ended with the anthem of AYOR, uniting everyone in a single dance.

After the conference, participants took a tour around the Mira Street, visiting workshops on writing hieroglyphs in the China Pavilion, on painting dolls - at a Belarusian hamlet, on pottery - in the Iran pavilion, etc. In the Asia pavilion, the participants visited 19 «houses» of the countries of Asia, Africa, Latin America, Australia and Oceania. Exhibitions inside the houses represented nature, everyday life and culture of the country or countries represented there. Young people were especially interested in the colorful pavilion of Azerbaijan, where the participants took pictures and danced to the national music.

UNESCO,  Embassy of the Republic of Azerbaijan in the Russian Federation,  AYOR,  Ministry of Sport, Tourism and Youth Policy of Kaluga region

Tourism
All projects of the Fund