The Sculpture of Alexander Pushkin

The project of the International Charity Public Fund «Dialogue of Cultures-United World» aimed at presenting the bust of the most famous Russian poet, writer and the founder of the modern Russian literary language to various countries of the world.

The first inauguration of the bust of Alexander Pushkin held by the Fund took place on 14 July 2014 in the National Library of Uruguay, one of the oldest buildings in the city of Montevideo. The Library received the bust from the Dialogue of Cultures- United World Fund and the Bering-Bellingshausen Institute for the Americas. The founder of the Bering-Bellingshausen Institute Sergey Brilev, Ambassador Extraordinary and Plenipotentiary of the Russian Federation to the Eastern Republic of Uruguay Alexey Labetsky, and the representative of the Dialogue of Cultures- United World Fund Igor Novoselov attended the opening ceremony. 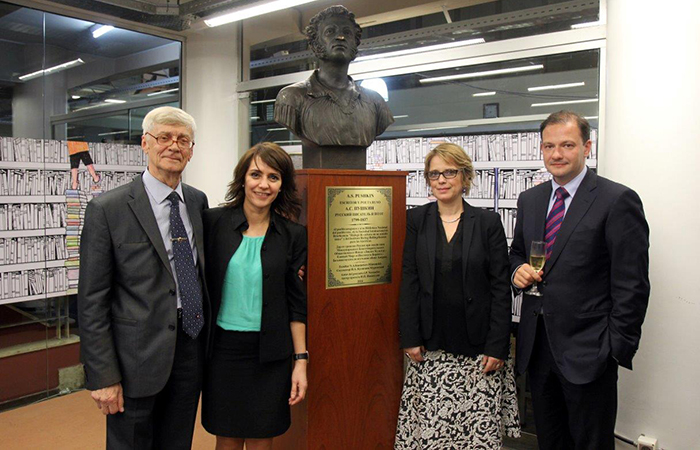 The bust of Alexander Pushkin was also unveiled in the Russian Center for Science and Culture in Ulaanbaatar, Mongolia on 20 November 2015. The guest list included the Head of the Rossotrudnichestvo mission in Mongolia Evgeniy Mikhailov, Minister-Counsellor of the Embassy of the Russian Federation in Mongolia Igor Arzhaev, Counsellor of the Embassy of the Republic of Belarus in Mongolia Mikhail Snopko, Deputy Speaker of Mongolia’s State Great Khural L.Tsog, President of the Mongolia-Russia Frienship Society J.Gurragchaa, President of the Mongolian Association of the Russian Language and Literature Teachers S.Galsan, local authorities, scholars and journalists. The opening of the bust took place during the closing ceremony of the 55th Annual Days of Russian-Mongolian Friendship and Cooperation.

Furthermore, Dhaka, the capital of Bangladesh installed the sculpture of Alexander Pushkin in the University of Dakha on 7 June 2016, the official day of the Russian language and in commemoration 217th Pushkin’s birth anniversary. The ceremony attendees included the Ambassador of Bangladesh in Moscow Saiful Hoque, Ambassador of the Russian Federation to the People’s Republic of Bangladesh Alexander Ignatov, Minister of Cultural Affairs of the Government of Bangladesh Asaduzzaman Noor, Vice-chancellor of the University of Dhaka Arefin Siddique, Head of the Rossotrudnichestvo mission in Bangladesh Alexander Demin, representative of the Dialogue of Cultures - United World Fund, and Secretary of the Pushkin section of the Writer’s Union of Russia Igor Novoselov.

Monuments,  Cultural and Educational Centers
All projects of the Fund