On March 22, 2015 «Dialogue of Cultures - United World» Fund in cooperation with the Embassy of the Republic of Cuba in the Russian Federation installed a bust of Cuban poet and writer Jose Marti in the territory of «ETNOMIR».

The opening ceremony dedicated to the 55th anniversary of the restoration of diplomatic relations between Russia and Cuba was attended by Governor of Kaluga region Anatoliy Artamonov, Russian TV presenter Sergei Brilev with the crew of TV channel «Rossiya-1», President of the Fund Ruslan Bayramov, Ambassador of the Republic of Nicaragua to the Russian Federation Luis Alberto Molina Cuadra, Ambassador of the Republic of Cuba to the Russian Federation Emilio Lozada Garcia and other representatives of diplomatic missions in Latin America. 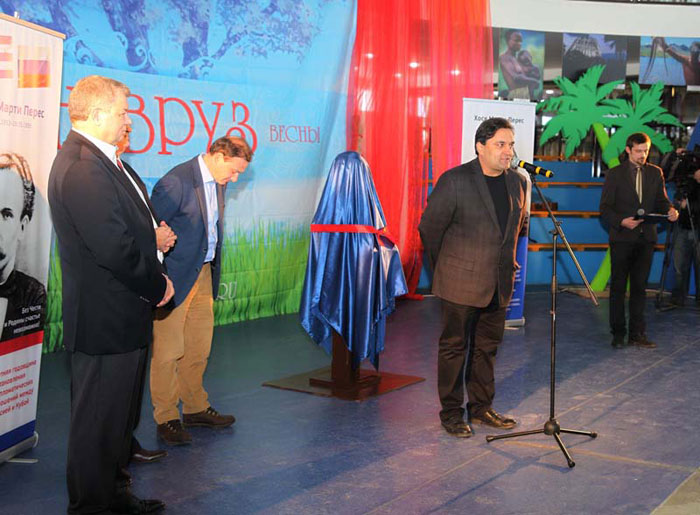 Welcoming the guests, Governor of Kaluga region Anatoliy Artamonov thanked the Embassy of Cuba for the decision to install the monument in «ETNOMIR» Cultural and Educational Centre. Ambassador of Cuba to the Russian Federation Emilio Lozada Garcia explained the government's decision by the fact that the territory of the Cultural and Educational Center represents (among other) the culture of Latin America, and «ETNOMIR» itself is an iconic place symbolizing developing cooperation and growing partnership of the world’s peoples.

Fund President Ruslan Bayramov, in turn, thanked the Ambassador for the trust to «ETNOMIR» and a valuable gift. According to him, in the near future the territory of the Cultural and Educational Center will include a new «Central America» quarter, which will fully represent the culture and traditions of the countries of Latin America.

Commenting on the ceremony, Russian TV presenter Sergei Brilev called the activities of the Fund and its President Ruslan Bayramov «unprecedented» (in the best sense of the word) for the development of relations between Russia and Cuba. He cited the example of the installation of a bronze bust of Russian poet Alexander Pushkin in Montevideo (Uruguay), the planned opening of a bust of the first cosmonaut Yuriy Gagarin in Havana (Cuba) and the idea of creating a «Walk of Fame» with busts of prominent figures of the Latin American countries in the territory of «ETNOMIR» Cultural and Educational Center.

Monuments,  Culture
All projects of the Fund