«The Link of Times» - Monument to K.E. Tsiolkovskiy and S.P. Korolev

The Link of Times - monument to K.E. Tsiolkovskiy and S.P. Korolev was opened in Kaluga together with the Government of Kaluga region on April 9, 2011. 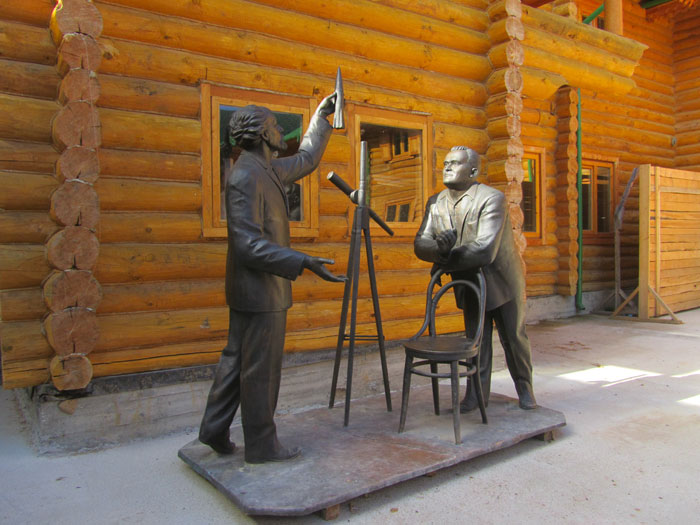 The opening ceremony was attended by Head of the Cosmonaut Training Center S.K. Krikalev, great-grandson of K.E. Tsiolkovskiy S.N. Samburov and other distinguished guests. The monument was installed in a small park of Kaluga at the intersection of Tsiolkovskiy and Korolev streets.

The sculpture is based on a real story. Historians have proved the fact that in 1929, already famous scientist Konstantin Tsiolkovskiy met with a starting designer Sergei Korolev in Kaluga. What was discussed at the meeting is unknown, but this fact is largely symbolic. The monument contains the idea of the transfer of knowledge from one generation to another with friendly parting words on the way of conquering the sky.

«Konstantin Eduardovich does not simply pass the baton of spiritual knowledge to Sergei Pavlovich. Their eyes are up on Gagarin relief placed on the trail of this rocket» - that is the idea of sculptor Alexei Leonov.

On November 25, 2011 the second copy of the monument was installed in «ETNOMIR» Cultural and Educational Center. The opening ceremony was attended by Deputy Governor of Kaluga region Nikolai Lyubimov, Head of the Federal Tourism Agency Alexander Radkov, Chairman of the Committee on Tourism and Hotel Business in Moscow Sergei Shpilko, Executive Director of the Association of Tour Operators of Russia and other distinguished guests.